This case study highlights an active 29-year-old man who enjoyed a usual state of good health until three months ago. At that time, he was paddle surfing and felt a painful stinging sensation in his left shoulder which has gotten progressively worse. He noticed arm weakness immediately, and has since developed some numbness in the elbow.

He was placed in a shoulder immobilizer for a month and this led to further progression of alternating symptoms of stinging pain and numbness. He has seen a variety of physicians and a diagnosis of thoracic outlet syndrome was ultimately proposed. He has since received cervical spine injections conducted via CT which have provided very little benefit.

Based on the ordering doctor’s data there is significant evidence for an ongoing thoracic outlet syndrome. Although testing has already been completed, the purpose of completing an MR Neurography at this time is to lend new information to the diagnosis by providing the treating physicians with clearer and more detailed images of the location.

The shoulder joint itself is normal; however, there is a small (3.0 cm) cyst surrounding the coracoid and extending over the infra-spinatus muscle and extending to the supra-scapular notch. The location suggests possible involvement of the supra-scapular nerve as it passes through the supra-scapular notch. The brachial plexus itself demonstrates significant edema in the C6 and C7 spinal nerves as they approach a point approximately 6.0 cm to the scalene triangle where there is an angulation of the plexus. At this point the coronal and oblique axial images demonstrate a significant focal swelling.

The C7 spinal nerve and proximal middle trunk, as well as the C6 components of the proximal upper trunk demonstrate increased caliber and image intensity. There is a focal increase further to about a 1.0 cm diameter swelling just at the lateral scalene margin, which could be consistent with local or focal trauma at this point and it is not typical of the thoracic outlet syndrome.

There does appear to be a significant abnormality within the brachial plexus with the dominant picture of edema, possibly with contributory entrapment at the lateral scalene margin. Although there is no discontinuity, the degree of abnormality does appear to be clinically significant. The MR Neurography shows the need for further clinical assessment of the swelling in correlation to the pain symptoms. An ultrasound examination of the cyst and perhaps biopsy may also be warranted. 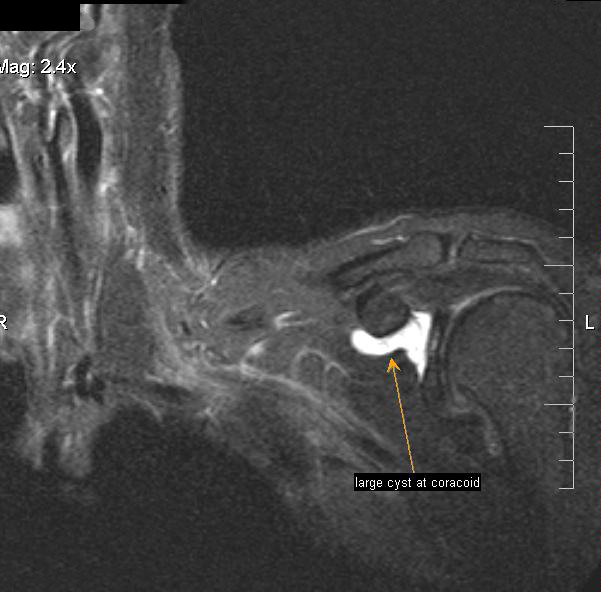 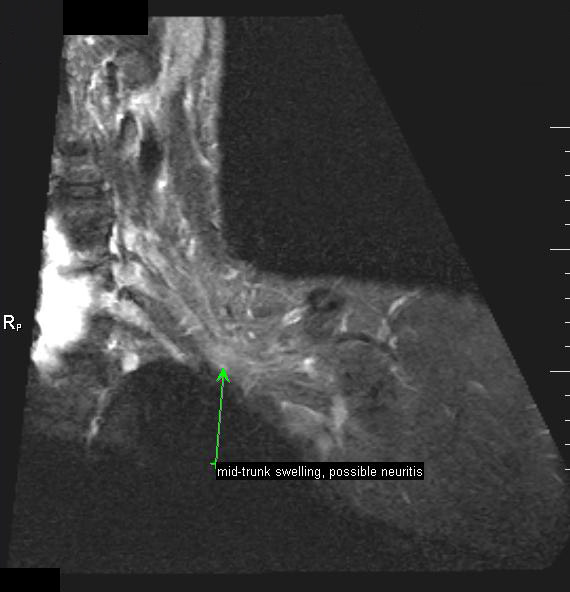 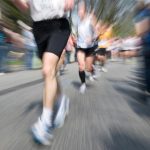 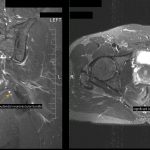