In this case study, we learn how MR Neurography (MRN) and Interventional MR (IMR) helped a thirty-something male regain his active lifestyle without surgery.

Our patient is a 33-year-old, left-handed male who has suffered from lower-back and pudendal pain for fourteen months. Only a year ago he was working out regularly but experiencing minor back pain.

Then, one day while performing squats during an exercise regimen, he experienced sudden severe pain in his left-lower back. Even though the pain started to slowly improve with time – and he was able to restart exercising – he began experiencing very frequent urination.

The patient was fully evaluated by an urologist for UTI, prostate and kidney stone, but with no significant findings. He was eventually diagnosed with chronic pelvic pain syndrome and underwent physical therapy for three to four months with no improvement. In addition, he has hypersensitivity and significant pain to the left genitalia – minimal symptoms when he lies down, but increased pain with prolonged sitting, ejaculation and some bowel movements. At this point, his primary concerns revolve around the frequent urination and hypersensitivity.

Impression and Plan: Based on his history, exam, data and findings, the clinical focus is on the unilateral left sided syndrome involving the pudendal nerve, and most likely the nerve to the obturator internus, as well. It is also likely an obturator internus based pudendal entrapment. The diagnosis plan begins with an MR Neurography study of the pelvis to look for evidence of specific entrapment (or any other unanticipated abnormality which may be causative or otherwise involved).

If the findings are consistent with an obturator internus and pudendal entrapment at the level of the ischial spine or distally on the obturator internus muscle itself, then the resolution will begin with an MR-guided injection for relaxation of the obturator internus, and treatment of the pudendal nerve in the Alcock’s canal area to see if this relieves the hypersensitivity symptoms. If relief is acquired, we will need to closely monitor the duration of response – if he has a prolonged duration, no further treatment will be required.

MR Neurography findings / indications: Initial neurography images demonstrate the course and caliber of the lumbar and sacral spinal nerves, the lumbosacral plexus and pudendal nerves. The lumbar and sacral spinal nerves are generally normal as they traverse the proximal and distal foramina. The sacroiliac joint does not demonstrate any significant inflammatory or degenerative change. The hip joints do not demonstrate any significant inflammatory or degenerative change. The piriformis muscles are asymmetric being larger left than right. The obturator internus muscles are asymmetric being slightly larger right than left, but note additionally there is an indentation within the left obturator internus muscle suggestive of a healed tear. At this site there was significant venous dilatation, as well as a focus of alteration of nerve caliber and image intensity. These findings are suggestive of a local adhesion associated with a focal disruption of the pudendal neurovascular bundle at this location and in association with some disruption of the underlying obturator internus muscle. The pudendal neurovascular elements on the right side are normal in appearance.

These images demonstrate the course and caliber of the pudendal nerves using multiplanar reformat techniques to provide an overview. The overall course on the right side is normal. The course on the left is slightly abnormal in that there is an indentation in the obturator internus muscle and the pudendal nerve elements follow this indentation with distal increased image intensity, as well as associated venous dilatation commencing at this site.

Interventional MR (IMR): The patient was brought to an interventional MR (IMR) surgical suite and placed into a lateral decubitus position with his left side up. We then obtained a series of localizing images. Once an appropriate image slice had been identified (providing ready access to the area of the left pudendal nerve, at the level of the Alcock’s canal and the left obturator internus muscle), it was mapped onto the skin surface.

The surgeon employed a titanium interventional device, advancing it gradually into the area of the obturator internus muscle near the course of the pudendal nerve in the Alcock’s canal. Once a good location was achieved adjacent to the course of the pudendal nerve, the surgeon introduced treatment agents. The device was then advanced into the obturator internus muscle, where additional introduction of treatment agents was carried out.

A number of images were captured demonstrating the anatomy of the pelvis. Next up was T2-weighted axial images in which hyperintense material is distributed within the obturator internus muscle and along its medial aspect. Sequential evaluation demonstrated progressive enlargement of the medial hyperintense fluid collection; this suggests progressive extravasation to the muscle spasm after injection into the muscle. These findings are consistent with significant fibrosis and spasm within the left obturator internus muscles, as well as mild fibrosis along the course of the pudendal nerve near the Alcock’s canal.

Conclusion: Nearly two months after his MRI-guided percutaneous chemomyolytic treatment of the left obturator internus muscle and chemoneuroplastic treatment of the pudendal nerve in the Alcock’s canal, the patient has been experiencing minimal to no pain. He has some intermittent hypersensitivity to the genitalia, but not to the same degree as pre-injection. He has begun to incorporate some stretching and walking into his daily activity. We have discussed slowly increasing the activity level as tolerated. The patient reports surprise at being able to avoid surgery and is pleased with his outcome. 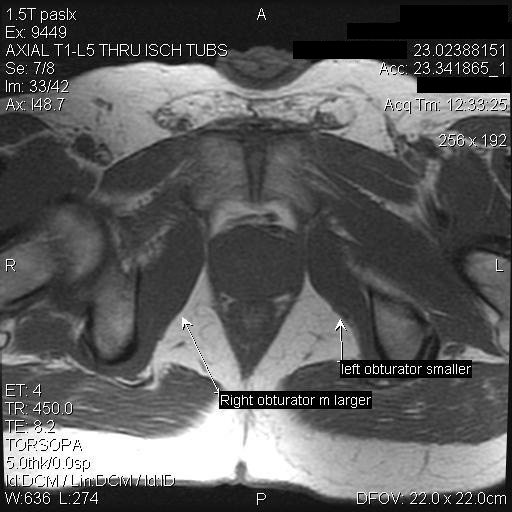 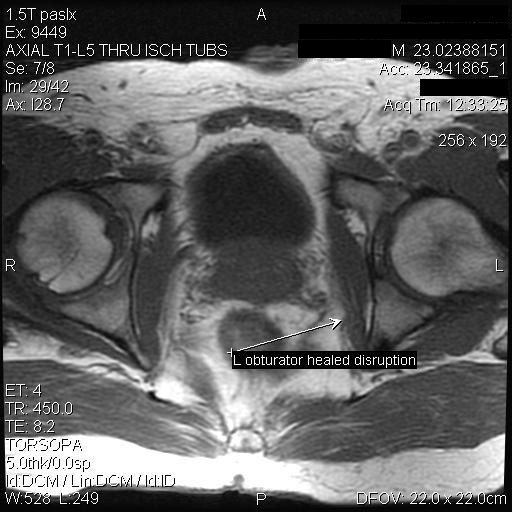 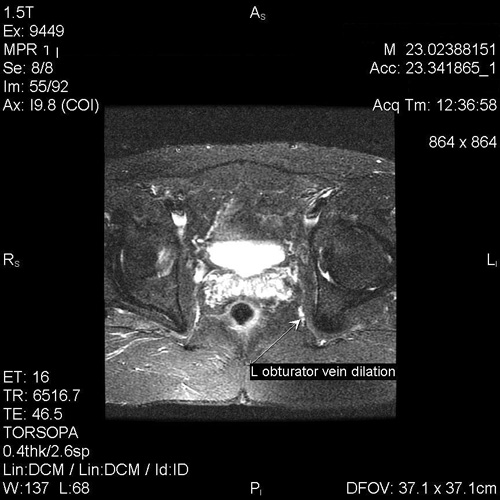 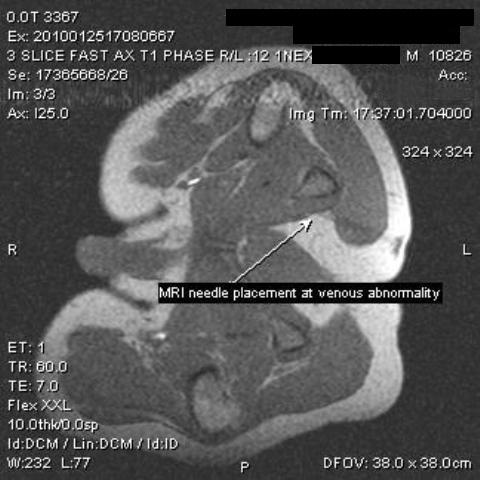 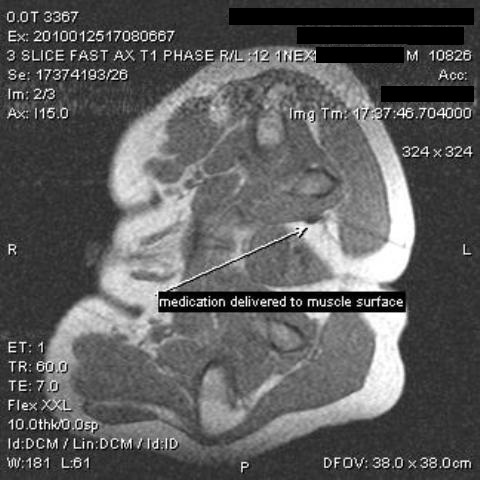 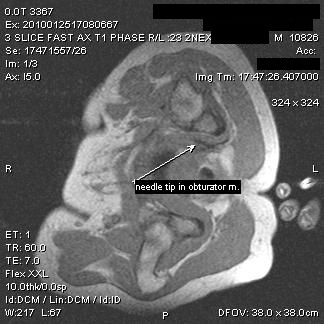 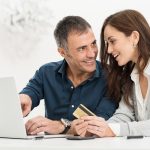 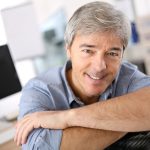