In this case study we review the example of a 42-year-old gentleman suffering from lower extremity pain.

The patient presents with left buttock and groin pain. He has had lower back and left hip radiating pain for approximately two years, which he has treated with over the counter anti-inflammatory medication and muscle relaxants.

Recently, the pain has become a sharp and persistent which increases whenever he leans forward or has to shift from a seated position. Also the patient notes that his sitting tolerance will vary depending on the position and the surface on which he is sitting.

He was seeing a chiropractor which did help to relieve the lower back pain. The chiropractor had identified the piriformis muscle as a possible problem and began treating the patient with trigger point therapy; however, results have not fully resolved the pain conditions.

The patient, who is an avid sports enthusiast including indoor rowing and semi professional sculling, would like to have a more comprehensive diagnosis so that he can work on specific exercises to prevent pain onset. He has intermittent pain, currently rating it at a 2/10 on the pain scale, worsening with certain positions.

After discussing possible treatment plans, his chiropractor decides to order an MR Neurography from The Neurography Institute. The findings show the piriformis muscles are asymmetric, with the left side being slightly larger than the right.

The hyperintensity change persists past the level of the obturator internus tendon as the nerve descends through the ischial tunnel. The sciatic nerve begins to normalize as it descends into the upper thigh becoming less hyperintense while still being distinct from surrounding muscle tissue at the lowest image levels.

There is fascicular prominence noted on the contralateral side as well; however, this appears to occur to a greater degree on the left than the right; therefore demonstrating related symptoms being on the left versus right sciatic nerve at the level of the sciatic notch. These findings may be consistent with the presence of a pelvic sciatic entrapment and clinical correlation is warranted.

Based on these detailed MR Neurography images the patient is diagnosed with a complex Piriformis Syndrome which pelvic nerve entrapments. The chiropractor who referred the patient for MR Neurography opts to consult a local neurologist for treatment planning. Two months after referral, the doctor contacts The Neurography Institute to thank them for their work and to request a meeting to discuss various pain management conditions that are possible for referral. 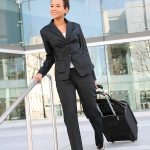