In this edition, we examine the case of a 50-year-old physician with reports of right sciatica and pudendal symptoms.

The patient is a 50-year-old right-handed male with reports of right sciatica and pudendal symptoms for the past seven years. He developed pain and aching to his right buttock and some sciatica following an extended car ride. Since then his symptoms have been continuous and somewhat varying in intensity, increased with sitting, especially on a hard chair and progressively worse throughout the day. Review of medical history indicates spinal abnormalities and prior surgical intervention for the pain. The patient underwent a right hip arthroplasty which helped with approximately 15% of his pain. He also underwent two L4-L5 epidurals with maximum two to three days of minimal relief. He also underwent a discogram at the L4-5 level that was inconclusive. The patient then underwent a neurolysis of the right sciatic nerve with a right piriformis release. Immediately postoperatively he developed right genitalia numbness. He had decreased sensation with defecation and rectal urge with no loss of bowel or bladder control. The surgery was followed by physical therapy and massage therapy with minimal relief.

Upon physical examination, history, review of data and images, it is the professional medical opinion that this is primarily a pelvic entrapment syndrome despite the spinal abnormalities. Soft-Tissue MRI Neurography, three dimensional reconstruction and analysis shows the lumbar and sacral spinal nerves do demonstrate some abnormalities. There is a disc bulge at L3-4 and loss of disc space height and spur at L4-5 impinging upon the thecal sac. There is mild foraminal stenosis and lateral recesses stenosis affecting the descending and exiting L4 and L5 spinal nerves. The S1 nerves are relatively normal in appearance. There is no significant nerve irritation in any of the lumbar, sacral or spinal nerves.

The piriformis muscles are asymmetric with the muscle on the left side considerably larger and bipartite with sciatic nerve elements passing between the two components of the muscle. The muscle on the right side demonstrates significant disruption and fibrosis with a split nerve-split muscle configuration. On T2-weighted neurographic images demonstrated severe atrophy and denervation change in the right gluteus maximus and obturator internus muscle.

At the level of the sciatic notch there is extensive fibrosis in the area of the sciatic nerve and the exit of the sciatic notch. The sciatic nerve itself is relatively normal in image intensity as it exits the sciatic notch and descends, however, at the level of the obturator internus tendon it begins to demonstrate fascicular level hyperintensity that becomes quite prominent as it exits the ischial tunnel. There is some distortion of the nerve at the lowest level of the ischial tunnel consistent with some adhesion of the nerve with adhesion of the nerve to the distal portion of the ischial tuberosity. There is some normalization in image intensity within the sciatic nerve as it descends into the upper thigh, although, some fascicles persist in the irritative hyperintense changes. On the medial aspect of the obturator internus muscle there is some mild vessel dilatation, which is mild-to-minimal and there is no significant prominence of pudendal nerve elements. These findings are consistent with the presence of a distal pelvic sciatic entrapment, as well as denervation of the obturator internus and gluteus maximus and also partial disruption of the piriformis muscle.

After open interventional Open MRI guided injections with significant improvement for a limited amount of time the patient proceeded with surgical intervention. A right transgluteal approach for reoperative neuroplasty of the sciatic nerve with distal release, neuroplasty of the nerve to the obturator internus, pudendal nerve and superior gluteal nerve was performed and at 2-3 weeks post –surgery the patient was reporting significant improvements. 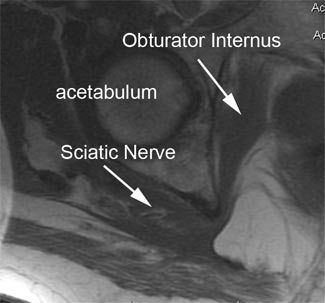 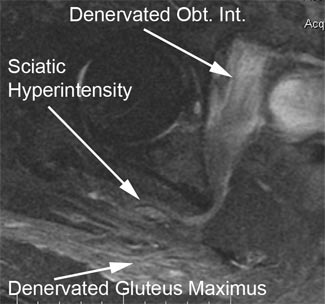 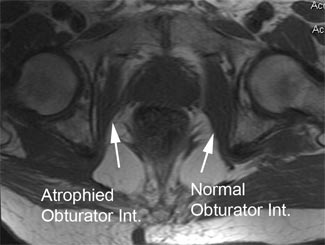 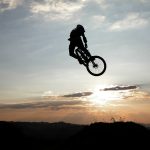