The development of MR neurography

Some nerves are small, but some are actually fairly large — the sciatic nerve can be as big around as one’s thumb. However, no matter the size, until the arrival of MR neurography, there was no reliable way to see nerves. “Arrival” is really the correct term, because the technology shot from nowhere to a thousand miles an hour almost overnight; the very first human images revealed spectacular details about the internal structure and injury pattern that had never before been seen. News media ran with the story; the discovery was published in Lancet, the international medical journal of record, along with the New York Times and ABC News’ Peter Jennings.

Though some nerves are quite small, the problem with getting visible images of them had nothing to do with their size. Rather, it had to do with the inability of any existing imaging method to tune in to the particular physiology of a nerve, in order to make it stand out (or highlight) in an image.

Nerves can take curving, complex courses through the human body. Because of this, it’s important to “remove” everything else from an image to provide the doctor with a clear depiction of a patient’s condition. MRI scanners produce a series of images of the human body that resemble “slices” — helpful for viewing many internal organs and structures. However, nerves typically travel through the slices, as opposed to within them. It’s the medical imaging equivalent of finding a needle in a haystack.

MR neurography depicts the nerve as the brightest structure in an image. This makes it easy for doctors to “remove” everything else from the image and follow complex, three-dimensional nerve-tree structures through a series of MRI image “slices.” This information, in turn, allows physicans to correctly diagnose and treat nerve-based conditions.

How does MR neurography make a nerve bright? Unlike other internal highlighting methods that rely on contrast agents (e.g. dyes), MR neurography is based on a method developed by Dr. Filler that tunes the MRI scanning station to the unique aspects of the water signal of a nerve. Part of his innovation involved the discovery that unique features of nerve tissue could be detected with specially designed MRI magnetic “pulse sequences” — thereby sending pulses especially for nerves and getting the results no other MRI scan had ever achieved.

What is a “pulse sequence”? It is the basic method of operation of an MRI scanning machine, involving a rapid, complex orchestra of radiofrequency and magnetic pulses that are sent out, pass through the patient’s body, and are returned to the machine for interpretation as viewable images. If you’ve ever had an MRI scan and heard the loud “knocking” sounds, that’s a fast-running pulse sequence. Changes in the rhythm of the knocking indicates differing pulse sequences.

But there’s more to an MR neurography image scan than just tuning an MRI device to send out specialized pulse sequences. There are issues involved in the way image “slices” are oriented for specific nerve types, and there is three-dimensional image processing that is unique to the MR neurography method. Using complex imaging software specially designed for this process, the neuroradiologist can review and compare the raw imagery and the processed, final images, producing a stunningly detailed perspective of a patient’s branching nerve tree — and any problems that may be affecting that structure.

And in this manner, then, the neurosurgeons of Neurography Institute are able to accurately diagnose your condition, and recommend a success-based method of resolution to help you alleviate your condition and return to a pain-free lifestyle.
Dr. Filler set out in late 1991-early 1992 to devise a new MR pulse sequence strategy, making it possible to reliably identify a nerve in an image.

How did all this get started? MR neurography was a classic “Eureka” moment, and it’s just one of the many inventions and discoveries made by Dr. Aaron Filler, co-founder and chief of clinical services of Neurography Institute.

Dr. Filler first became interested in seeing images of nerves while working on his Harvard University PhD thesis in the mid-1980s. While attempting to map complex branching nerve trees that control the back muscles in the human body, he found that no matter where he turned in medicine or science, there was simply no way to “see” nerves in medical images of the human body.

After beginning his neurosurgery residency training in Seattle, Washington, Dr. Filler began work on the nerve imaging dilemma. His original plan was to develop a specialized contrast agent for nerves. The idea was to use a biological phenomenon called “axonal transport” to carry contrast molecules to the interior of nerves. He started the initial axonal transport project in Seattle in 1988. Two years later, Dr. Filler began a one-year clinical rotation in London, England, as part of his residency. It was during this period that great gains were made, as he began his MRI phase of contrast research which was funded by the Neurosciences Research Foundation of Atkinson Morley’s Hospital (AMH) in Wimbledon, famed for its tennis event. It was at AMH in the 1970s that Godfrey N. Hounsfield designed and built the first CT scanner, a feat for which he won a Nobel Prize in Medicine in 1979.

Most of Dr. Filler’s research was performed at the associated “parent” hospital up the road, St. George’s Hospital Medicine Center in Tooting. There, he had access to some of the world’s most advanced medical-research MRI systems in existence. Amazingly, though most of this work was performed in 1990, the magnet systems at St. George’s remain well ahead of most comparable systems even today.

Keep in mind that Dr. Filler’s mission at this point was to devise a contrast agent to allow the viewing of nerves in MR images — and that modern MR neurography does not require any contrast agents whatsoever. So what happened?

Dr. Filler did succeed in creating injectable contrast agents to enhance MRI scans, and the research progressed so well that he stayed an additional two-and-a-half years to further his studies.

But in discussing his research with an Oxford University-trained physicist by the name of Franklyn Howe, Dr. Filler realized he needed to try a slightly different direction. As Dr. Howe argued, using contrast agents to identify nerves in MRI scans was providing a “circular” reasoning to his research: Dr. Filler was using the contrast agent both to show nerves and show the agent. Thus, his experiments wouldn’t be fully valid until he was able to depict nerves in MRI scans without the agent, in order to prove the success of the agent in brightening nerve structures.

Determined to accomplish this, Dr. Filler set out in late 1991 and early 1992 to devise a new MR pulse sequence strategy that would make it possible to reliably identify a nerve in an image, thereby allowing him to prove that his contrast-agent experiments were performing as his research had indicated.

After much reflection on the biophysics of nerves and the complex physics of MR pulse sequences, Dr. Filler assembled a radically unique pulse sequence strategy. It was based on simultaneously suppressing the image signal from all the other tissues, with the pulse sequence actually “squeezing” together a variety of differing imaging strategies.

Before it was tested, Dr. Howe predicted failure because he felt all this simultaneous suppression would leave no signal at all to measure. However, the first image run in February of 1992 produced a startling result — a strange new image type, completely blacked out except for the intense bright signal of the nerve. Everything else had disappeared completely, leaving the nerves to glow brightly, like the smile on the Cheshire cat in Alice in Wonderland.

Additional testing over the next few days confirmed the results: Dr. Filler’s new pulse sequence had isolated nerves in a magnetic resonance scan for the first time. Professor Griffiths, the lab director and editor-in-chief of one of the leading academic MRI journals, agreed that this was an astonishing advance in MRI technology — a pure nerve image with no contrast agent required.

Dr. Filler’s pulse sequence required an extraordinarily advanced MRI scanner. However, the nerve imaging technique acted as a Rosetta Stone; now that nerves could be instantly and reliably identified, Drs. Filler and Howe were able to rapidly test a variety of other MRI sequences, each producing a similar effect. Within a week, they discovered a second sequence that had the potential to work on standard 1.5 Tesla clinical MRI scanners.

Soon thereafter, Dr. Filler returned to his neurosurgical residency program in Seattle where he asked Dr. Jay Tsuruda to test the new sequence on one of the 1.5 Tesla General Electric magnetic resonance scanners at the University of Washington Hospital. The first patient was imaged in November of 1992 and the spectacular first image was produced (see below) — the picture seen around the world in the Lancet, New York Times, and on ABC News and CNN when it was published in March 1993. 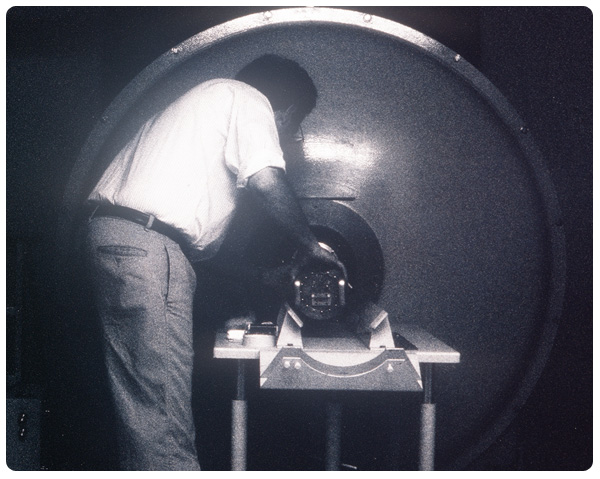 This image was taken by Franklyn Howe in 1991 and shows Aaron Filler, MD, PhD loading an experimental MRI spectrometer (4.7 Tesla) at St. George’s Hospital Medical School in London. Permission is granted for use in educational, research or academic publications or news sources media. Attribution is to Franklyn Howe.

The development of MR neurography

Dr. Aaron Filler’s pulse sequence innovation that created modern MR neurography had its first major test in November 1992. Using a clinical General Electric Signa MRI scanner modified to use his now-patented pulse sequence, Dr. Filler and his research partners were able to produce the above scan that highlights the sciatic nerve structure while darkenening all other surrounding tissue. This was the first image that demonstrated the ability to capture the fascile pattern inside the nerve; it was also the first image to prove that the structure highlighted was indeed a nerve.

The imagery received extensive worldwide attention in the medical and news media, and was published in Lancet in 1993.

A – Cross section of the thigh. The arrow indicates the sciatic nerve. This patient had suffered a stab wound to the the thigh which had severed his sciatic nerve.

B – Blown-up view of the sciatic nerve revealing the internal fascicle structure.

C – A three dimensional reconstruction of the nerve based on “maximum intensity projection” of the nerve. This image closely matches the shape of the sciatic nerve seen in the image (D).

D – Intra-operative photograph taken during surgery. The photo shows the cut sciatic nerve. The arrow indicates the suture line where nerve grafts have been sown into place. 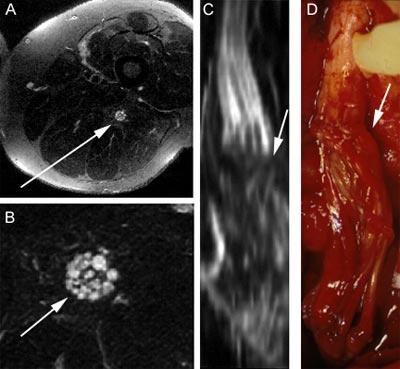 For More Information Or To Schedule A Scan Near You